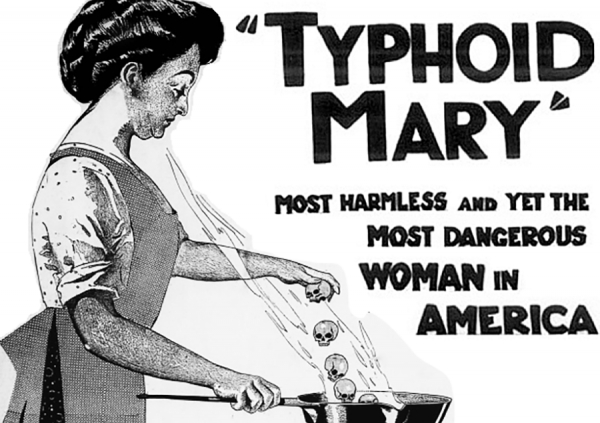 Everyone knows the story of Tokyo Rose, the infamous broadcaster who did her best to wreak psychological havoc on the Pacific troops of World War II. But 40 years before she arrived on the scene, another feminine anti-hero entered the psyche of Americans everywhere.

Mary Mallon had emigrated from Ireland to the US in the 1890’s, and got a job as a cook for a wealthy New York banker.  In about a week’s time, 6 of the 11 household members came down with Typhoid, which had a mortality rate of 10%.

Mary moved from house to house as a cook, infecting each of the families she worked with, leaving a string of sickness and death in her trail. But she wasn’t connecting the dots. She felt fine, being our Nation’s first discovery of what was then called a ‘healthy carrier.”

It took a detective named George Soper, hired by one of the families, to sleuth out the true root cause of the mysterious string of illnesses.  Soper had previously been hired by the government to investigate outbreaks, earning him the title of ‘epidemic fighter.’ He quickly recognized Mary as a common thread. He stalked Mary in Manhattan, repeatedly trying to obtain samples of her feces, urine and blood.  She refused, and kept chasing him away (one time with a carving knife in hand).

Soper’s tenacity would end up showing America how a single unwitting carrier could be the base cause of widespread disease outbreaks. He found a trail of 22 people that were directly infected by Mary, some of whom died.  She was eventually arrested, forced to give stool samples, and was found to test positive for Salmonella, the root cause of Typhoid Fever. She was quarantined against her will, but successfully sued for release, and ended up cooking again in public kitchens, continuing to spread the deadly disease. By some estimates, Mary was ultimately responsible for about 3,000 cases of Typhoid. Mary still refused to believe she was a carrier and was placed back in quarantine for over 20 years, imprisoned until her death.

She became stigmatized with a name that would ring throughout the next century. “Typhoid Mary” became the butt of jokes, cartoons, and public ridicule. “Typhoid Mary” even appeared in medical dictionaries, as a disease carrier. It also became an oft-used term for anyone who brings bad luck, male or female, as in; “That guy is such a typhoid Mary; everything has gone wrong since he showed up.”

Way back when, there was no talk of total societal shutdown as pandemics loomed and diseases seemed to run rampant. It was just dealt with as part of life and we all lived with the fact that polio, scarlet fever, measles, etc., could take their toll on us and our loved ones.

It takes a great leader to safely guide a country and its people through dangerous times. We’re covered in that regard!  It also takes common sense. You’re probably sick of hearing it, but the most basic preventative measure would have made a big difference 100 years ago. If Typhoid Mary had simply washed her hands several times a day, lives would have been saved. Stay safe!