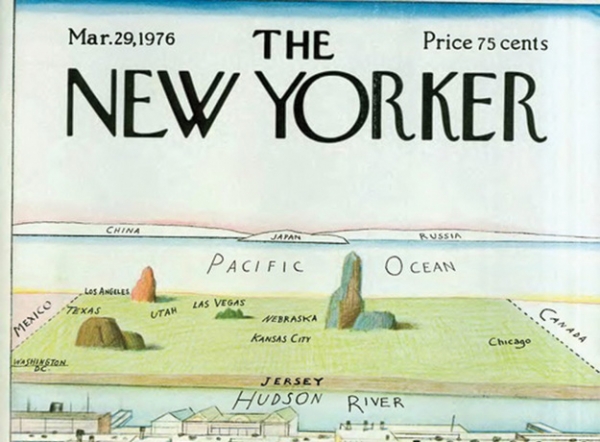 The election results reminded me of an old cover illustration for the New Yorker magazine.

It is a myopic visual of the United States from the perspective of a New Yorker. It illustrates a disproportionate perception of the grandeur of New York in relation to the insignificance of the rest of the country. And the image is quite representative of the very geographic and ideological fault lines in the US that deepened this past November.

On one side, the post-election demonstrations in major cities were criticized as radical and disjointed. And the participants were further discredited by the violence of a few. To their credit, they united not behind the megaphone of a labor organizer or politician, but through social media out of solidarity. Many were stunned and scarred by the election results.

On the other side, working class people from the center of the country were dismissed and ridiculed. It was suggested they acted out of ignorance and xenophobia. To their credit, they voted, and they voted not for handouts, but for jobs, decent wages, and their own sense of security. Many had felt ignored – not necessarily counted as a minority, and not poor enough for our empathy.

If ever the right to vote and the significance of the Electoral College were tested it was in November 2016. States between California and New York (and the tip of Florida for that matter) overcame the power that comes with the heavy concentrations of wealth and influence on the east and west coasts of the United States. The college empowered those smaller states in the middle.

Given the awesome power President-elect Trump will have with the new Congress, and a Supreme Court vacancy, we can only hope he addresses in earnest the concerns of those who put him in office. May he focus on their access to what America has to offer. And may he live up to their expectations.

We in the meantime must keep in mind that often, as human beings, we can only see as far as our own hand – pure myopia. The problems of an entire country or of the world seem abstract and fuzzy, as we struggle with our more immediate needs and worries. He wants access to safe housing. She wants equal pay. They want to stop police brutality. And they want jobs to stay in the US.

Not one of these issues is unimportant. But they demonstrate how our needs differ. I always say to people in the Bay Area that I would be hard pressed to believe that in a state like Montana, which is under snow five months out of the year, that the burning issue of the day would be the installation of bike lanes.